A Spagna in the Works - CD 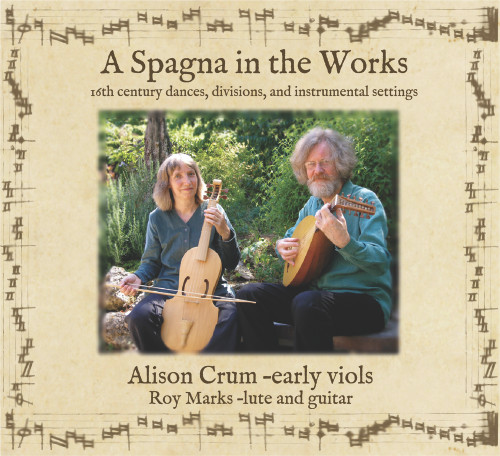 A Spagna in the Works - CD

The sweetly modest, satisfying, and gentle sonority of domestic music-making in the renaissance quietly belies compositions of unsurpassed musical skill. Featuring music that may be enjoyed equally either as something pleasantly light in the background, or more attentively as something serious and profound, this CD of music centered around the mid 16th century is performed on the viol accompanied by the lute, and, like a mesmeric, draws the listener into a world that is almost unimaginable and certainly almost forgotten. It is the result of more than twenty years of a duo partnership between Alison Crum and her husband Roy Marks. Together they have collected a large number of historical copies of instruments, both bowed and plucked, from which they are able to choose the ones most appropriate for pieces from their repertoire of music ranging from the late 15th to the late 18th century. In their search for the particular sound which so inspired composers at that time, and through many years experimenting with makers' ideas on the construction and stringing of each of the various instruments, they have produced a recording that truly illuminates the music of the renaissance.

The title of the CD is a pun on the British expression, "a spanner in the works" (tipping a wink to John Lennon's book, A Spaniard in the Works), and includes 11 settings of the bass dance melody, La Spagna. La Spagna was the tenor line moving in slow notes around which composers and performers constructed and improvised counterpoint well into the 17th century. The CD also includes music by Ortiz, Ruffo, Festa, Rore, Rognoni, and a dozen other even less known composers, and ends with two pieces written by Roy himself.

"This delightful CD gives an insight into the special, ethereal world of serious music-making in the renaissance period. It is an intimate, sophisticated sound for the privileged, cultivated listener."
—The Viol

"Recordings of later viol music often try to cover or minimize the sound of the articulation of the bow, but this recording embraces it as an essential and beautiful component of the music… the variety of colors that Alison produces from all the viols is astonishing."
—Viola da Gamba Society of America News

"…a recording of sensitivity, clarity and warmth… the final track (Roy's Lullaby) creates a mood leaving us somewhere between a hypnotic trance and suspended in mid-air [making] the perfect conclusion to an imaginatively constructed programme, skillfully realised and expertly recorded."
—Thamesis