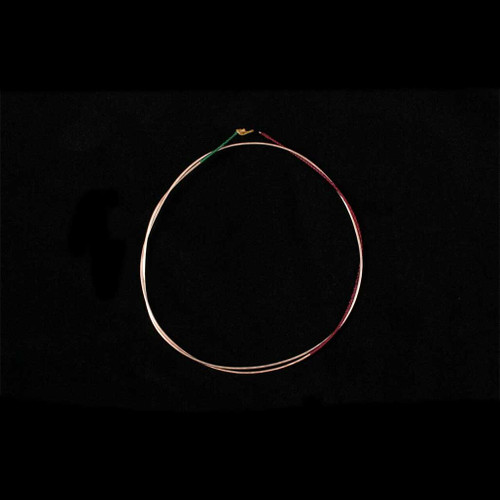 This is a single length (60cm, 24") gut core string with a silver-plated copper wire wound onto the gut in tandem with a thin silk layer wound onto the core between the gut and wire. Because of the plating, the wire is left round so that you can feel the texture of the tops of the wire. The tone is quick and bright.

An option is now available for the Academie line of wound strings involving the silk underlayer. This is a thin wrapping of silk that is wound around the core of the string before the wire is wound on. For many years we have been putting this underlayer on Academie strings in response to customer requests, but awareness and knowledge of historical performance practice has progressed enough now that we now offer this feature as an option. According to our research, it is unlikely that such an underlayer would have been used on wound music strings before about 1900 — and for those players who want to explore the true nature of historical strings, we are now offering to make strings without this buffer layer. The effect of the underlayer is to increase the internal damping in the string which gives the string a warmer tone. Without the underlayer, the tone of the string is brighter and has more of the lush, ravishing tone attributed to historical times.