Canadian Customers, Please Note: We are currently experiencing issues with our cross-border e-commerce provider for Canadian orders.
Please feel free to contact the workshop directly and we can process your order manually: support@gamutmusic.com / 1-888-724-8099.

This is a single length (22"), single twist, Lyon-style sheep gut string knotted at one end with a leather washer. It is available with a natural or varnish finish.

Lyon-style gut is named after the town in France which was famous for a particular type of flexible gut string. From the 16th century these strings were recommended as being some of the best strings for basses. Our reproduction of this string is made from gut specially processed in our workshop to be soft and responsive. The gut is twisted in one direction to a high twist for the optimum combination of durability and flexibility. The Lyon should be preferred when a little extra stiffness is required under the bow or finger. This type of string is characterized by a tight and visible twist. The color tends toward opaque light to medium yellow. The Lyon-style of gut string is a high twist, single spin construction that offers a tone that is full and warm with a powerful fundamental and complex, pleasing upper partials. 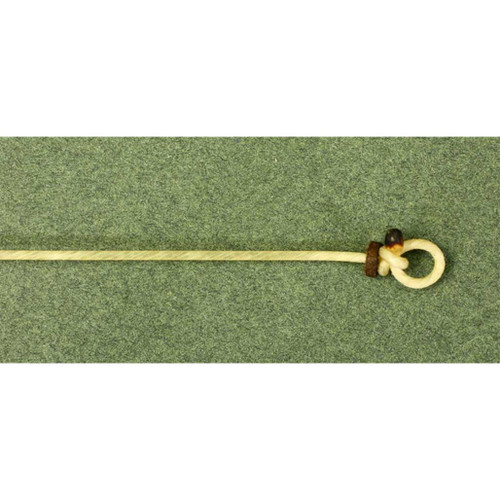