SKU:
A235
Shipping:
Calculated at Checkout

This is a single length gut core string with a nickel silver wire winding and a thin silk layer wound onto the core between the gut and wire. Because the wire is round, the surface of the wire is polished so that the string feels smooth. The tone is warm and full. The end of the string that goes into the tailpiece is knotted and there is a loop of gut on the end. This knot will hold the string in most historical tailpieces, but may slip through a modern tailpiece.

Modern tailpieces have a hole-and-slot arrangement for holding the string in place and most tailpieces today have slots cut into them that are so wide that the knot tied at the end of the gut string will slip through when tension is put on the string. To prevent this, we can install a leather washer on the string before it is wound. This washer is wide enough that it will prevent string ends from slipping through most tailpiece slots. There is an extra charge for this service.

(No reviews yet) Write a Review 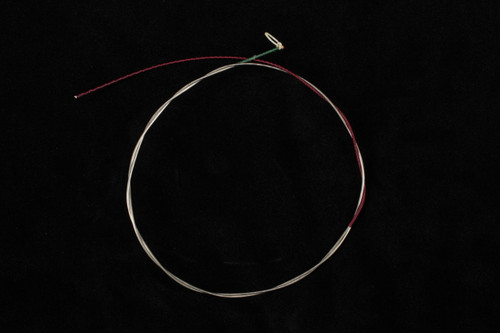